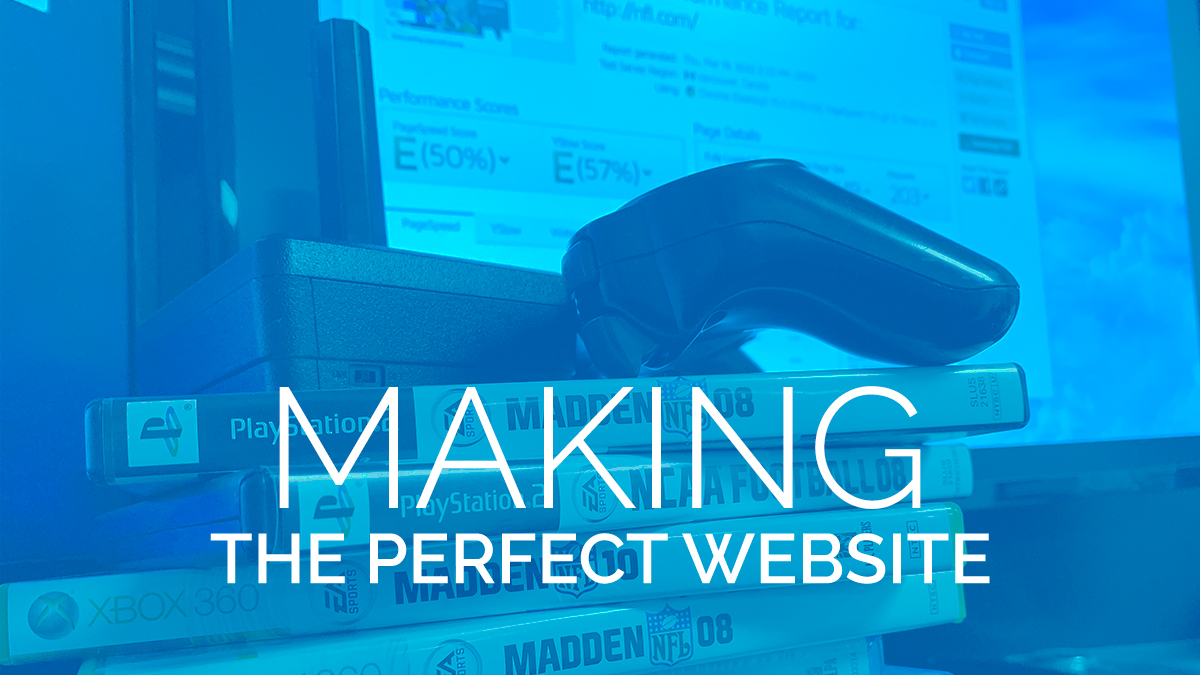 As a teenager (and actually an adult), I loved playing sport video games. I loved Madden and especially loved NCAA football. I had my fun playing against buddies (before online gaming), but found most of my enjoyment in franchise or dynasty mode. It wasn’t even just ‘running’ a team – but the entire process of creating my roster. See, I actually handmade all of my players in the create-a-player mode.

How does this have anything to do with websites? Just like the players I would create, we craft websites based on our personal preferences and needs. Not all players can be 99 overall and not all websites can be 100 on every website audit. Making the perfect website is not an easy task, but can be done.

The Formation and Rules

For the sake of getting way too far into the weeds, let’s use my Madden experience as a story point.

I started playing in 2002 with friends. Instead of picking a normal team, I explained I wanted to create a team and join the NFL as an expansion team. Instead of the Houston Texans (the expansion team that year), the Bridgeport Bulldogs would join the league with a complete set of customized players. The Texans were ranked as the worst team with an overall rank in the low 70s. In an attempt to be fair, I went through the 53 man roster of the Texans and took down every single player’s overall ranking. This was my guideline. If the highest player on their team was a 90 overall, that would be my highest player.

Of course, this was some good salesmanship on my part. A 90 overall punter and a 90 overall quarterback are two totally different things. This flaw in the system allowed me to create a much better team – yet it took some structure.

My good friend Chad and I would play as the Bulldogs against Shawn and Rodney (Falcons), and Williams and Josh (Steelers). It was a glorious summer and I do believe we won the Super Bowl. We took an expansion team, figured out a flaw to gain the advantage, strategized, and won the league. Not to mention, we were pretty good players as well.

How Creating a Team in Madden Relates to Making a Website

All business owners start the same. They realize they need a website and they do a search for “web design companies near me”. They might stumble upon a few paid ads from Squarespace or Wix. More than likely they get to the map-pack and pick one of the top three names. They do their research and make their call. Hopefully, they land a winner and talk about making the perfect website.

The rules are similar. They are entering the league just like my Bridgeport Bulldogs expansion team. They are going to be at a clear disadvantage with a low overall team score. Their next steps are critical – how will they build their team (website)?

Offense or Defense. Speed or Functionality.

A major question I asked myself when I started making players, what do I want to lean on – offense or defense? Playing Madden against real people can be complicated. It is a game of high scoring and commonly an offensive game. I figured I would lean on my skill and build a strong offensive team and hope to make less mistakes than my opponent.

Ultimately, we would love to be well balanced. Websites don’t tend to be balanced. You can have a really speedy website, but most of the time this is because there is no media or features. You can also make a really trendy, awesome website with tons of features, images, and videos but it is slower than Tom Brady’s 40 yard dash time. Sometimes you can find a nice balance, but often you lean to one side or the other. Making the perfect website often forces us to find a balance.

I decided to put my equity into the QB, O-Line, and RB. To balance it out, I put most of my second tier equity in defense. This would allow me to use several studs to get the points and have a balanced defense to help capitalize on the other users errors.

I’ve made websites from scratch and I’ve used several popular Content Management Systems. I’ve actually had static sites get a perfect speed rating. They also had far less functionality and took a lot more time to add features. On the other hand, my WordPress sites are lucky to get a passing grade for speed. But if a client wants to make an edit or needs a feature added, a simple plugin can make this happen within minutes.

You might not care as a business owner how the developer makes your site. You might not even think to ask. But, it is an important question.

Do you plan on making your own changes or do you want to pay someone that knows HTML or PHP?

Did you like Deion Sanders or Jerry Rice? Deion Sanders was flashy and charismatic. ESPN would report his every move. He was fantastic on the field, but his antics took away from his play. Jerry Rice, on the other hand, might have seemed dull, but the man holds the records.

You might want a site with huge sizzle videos or a 100-image picture gallery, but sometimes you just need a solid H1 and H2 heading. Knowing your audience and taking that info effect can make the difference in making the perfect website.

When I created my team, I created slower wide receivers with good hands. I knew I could run quick hook routes and get first downs by getting 5 yards at a time. This saved me using all of my points on the flash and instead I used it for defensive players.

The best team on Madden each year is never a 100. Most of the time, the best teams are in the 80s. The users pick their style and what compliments their skill set. I loved to run the ball, so I had a scrambling quarterback and an elusive running back. Finding a perfect balance can give you a winner.

I tend to use WordPress for most of my websites. This hurts speed, but I’ve found ways to balance it out. I won’t download every plugin known to man – knowing these slow down the site. Also, I make sure to strip down the themes from having tons of unnecessary elements and features.

You can also use video and great imagery on your site without sacrificing your website speed. Make sure you always optimize your images with a site like TinyPNG and use YouTube embeds (instead of loading the video on your host). CDN’s will also give you a little boost and help you keep the speed.

If you understand the game, you can make a winning team without being a 100 on a website audit.

Design and content are subjective. I can’t tell you what font or color to use when making the perfect website. Instead, I can tell you that having a website that loads fast on mobile should be a top priority. Also, users and search engine crawlers should be able to find the necessary information on your website – easily. If your website is slow and you unorganized, you will have the same fate as the Houston Oilers.

It’s not hard to find that perfect balance. Ask your developer to run some speed tests (you can run your own). Check out the document structure and for the website schema. The good old fashioned eye-ball test also works for design. Hopefully, the site looks like the Chargers powder-blue jerseys and not the Packers throwbacks.

Find the balance. Offense, defense, and special teams – you don’t have to be ranked a 100 but make everyone pull their weight and you should find yourself in the playoffs.

Your About Page is Google

Template About Pages are BAD

About THEM! – How to Build Your Website About Page